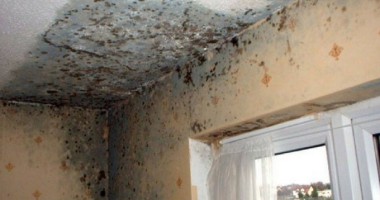 Dampness is a serious problem in some homes.

Common causes of this are:

These kinds of dampness are treated by having the fault repaired by a tradesperson or as a DIY job; rising damp certainly requires a professional builder.

If a home has dampness and none of these problems applies, it is likely that the house is suffering from CONDENSATION: it is estimated that 70% of all dampness is down to condensation. Indeed, one in five British homes experiences some condensation-related problems during the winter months.

What is condensation and what causes it?

There is always moisture (more accurately, water vapour) in the air, but normally it is invisible. Human activities like bathing, showering, cooking, boiling a kettle, drying clothes or breathing generate warm humid air (i.e. air holding a lot of water vapour). This warm  humid air is drawn to cold areas by heat transfer and it then cools down quickly when it collides with cold air (in unheated rooms) or hits a cold surface (window panes or cold walls), especially a surface where there is little movement of air. As the humid air cools, the water it holds condenses out of it (i.e. it changes from water vapour to liquid water) and forms droplets on the cold surface.

While condensation is rarely a problem in the summer, the amount of water in the air (otherwise known as the humidity) inside our homes is higher during colder months. This is because we tend to have the heating turned up high and the windows closed.

In summary, condensation is caused by four things:

What are the effects of condensation?

Mildew, fungus and mould cause many health problems including sinus problems and skin rashes, as well as serious respiratory conditions like asthma and bronchitis. These are especially severe for people with existing skin conditions, compromised immune systems, or who already have respiratory difficulties. Children and the elderly can be especially affected.

How can a householder prevent or reduce condensation?

Preventing condensation in the first place is far easier than trying to take remedial action to deal with its effects. To tackle it you need to:

let the moisture out (tackle the ‘V’ in HIVE)

insulate the home (tackle the ‘I’ in HIVE)

heat the home adequately (tackle the ‘H’ in HIVE)

but please DO NOT:

Here is an advice video from a housing association (691) How To Prevent Damp, Mould and Condensation | 'How To' Guides with Sanctuary Housing - YouTube