Hi welcome to the puppet group web page. Our group meets from time to time to have some fun with puppets.
We perform routines to music as a fun form of worship and also to learn  a bit more about following Jesus. We often have the opportunity to take part in special services within the church, and sometimes perform at other events. If you are interested in joining the puppet group, please speak to any of the leaders of Faith Builders

A First For Moncreiff Puppets!! 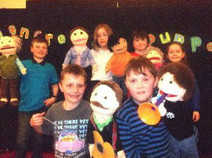 Tuesday 6th March 2012 saw our first ‘invited’ performance by Moncreiff  Puppets, as we made our way along to perform at our own Women’s Guild in Moncreiff. Our 6 puppeteers (Adam Moran, Lewis McKay, Greg Cunningham, Amy Whyte, Rachael Bern and Tony Hillis) had been practicing very hard (for 30mins after church each week) enthusiastically learning the new routines to perform.  On the night, the children performed brilliantly. They individually introduced their puppets to the ladies, telling them a bit about each puppet.

The children also performed the 3 difficult routines that they had learned over the last couple of months, and showed a great deal of skill in remembering when to pop their puppet up and down at the correct point in the song, and to accurately sync their puppet’s mouth movements with the words of the songs. Not easy at all !! As I’m sure some of the ladies from the Guild will tell you after they had  the opportunity to have a go at ‘puppetry, for themselves on the night. 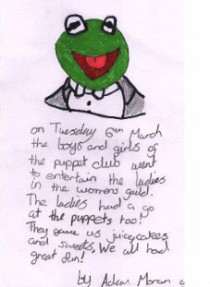 In this age of computers and video games , the puppets are a great way to engage children in the work we are doing within the ‘Young Church’ and provides a very different and enjoyable way for the children to participate in worship. The children really enjoyed the opportunity to practice and perform with the puppets, and especially enjoyed the juice, cakes and sweets (Mmm!) provided for them by the ladies after their performance.

We would like to take the opportunity to say thank you to the
ladies forthis, and hope that we can maybe come back again for a return visit some time in the future.